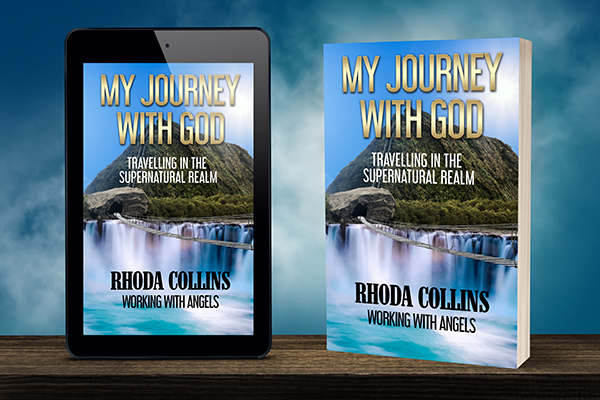 Heavenly Crowns you should be Wearing / The Seven Spirits of God

The Four Chambers of the Heart/Travelling in the Spirit

Spirit of Wisdom and Her Handmaidens / Getting Justice in Heavens Courts

My journey with God goes to multidimensional levels of reality that’s beyond human comprehension.

Nothing in this world is worth striving for as this world is in the process of decaying day by day. When I’m in the spiritual realm with Father, Jesus, angels, the cloud of witnesses and all the other beings, I’m in His multidimensional love. I experience Heaven beyond all that I could describe with human words. There is nothing like it. Father’s love is immeasurable.

In the spiritual realm are gardens, treasures and dimensions that we, as children of God, have inherited and that are available to us now and through eternity. What I’ve experienced on My Journey with God and revealed to you here is only a fraction of reality.

Father says to you, “My dear ones, don’t hesitate to come up here. I am waiting with My arms open. Come and fellowship with Me and drink from the water of life. Get to know Me Face to face. I AM. My heart leaps for joy for each of you to experience My multidimensional love and all that I have in store for you.”

Jesus says to all of you reading this precious book, “I Am the Son Who died for you. Receive My love in a unique way. Come up here to meet me Face to face. Let’s travel together in the unknown and explore Father’s kingdom. Heaven doesn’t compare with anything you’ve seen here. Let your hearts expand beyond where you are. My heart longs for you. Come. I AM. My love for you is infinite.”

“And set your minds and keep them set on what is above (the higher things) not on the things that are on the earth,” Colossians 3:2

“And He raised us up together with Him and made us sit down together [giving us joint seating with Him] in the heavenly sphere [by virtue of our being] in Christ Jesus (the Messiah, the Anointed One).” Ephesians 2:6

AN ENJOYABLE SUPERNATURAL ALTERNATIVE FOR CHILDREN AND YOUNG ADULTS 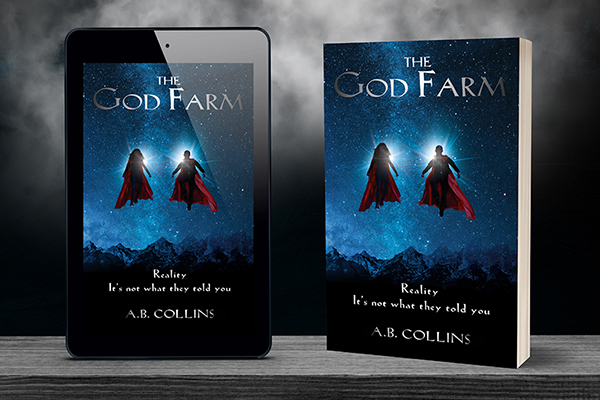 Two kids discover reality in the most unlikely place where they’re taught how to become gods.

Setting out on adventures in different dimensions, these two new gods defeat wizards, monsters and other nasties afflicting Earth to rescue those trapped in their fantasy worlds of superstition and illusion, setting them free to become gods themselves.

Will a final epic war destroy them and the planet before they can stop it and move onto more important things… like living for eternity in peace, governing their own personal universes?

Take a detour onto the road to The God Farm.

They’re waiting there to teach you how to become a god yourself.

If you like J.R.R. Tolkien’s The Lord of the Rings, C.S. Lewis’ Narnia and William Young’s The Shack, then you won’t be able to put down the riveting adventures of these heroic God Operators.

“I have been reading The God Farm with my kids. Now my 13 year old daughter has been impacted and has been asking God to visit Heaven. While at church yesterday she received a prophetic word from God saying he has heard her request. She started crying. She told me after that she has been asking God to come visit Him in Heaven.” Larry, TX August, 2020

“It totally transformed my 13 year old daughter who is now seeing angels, spending time in heaven daily and is now being taught by God how to see into both realms with her eyes open.” Larry, TX Kingdom Talks Media

GOD HIMSELF HAS WRITTEN THIS BOOK, BREATHED ON IT AND PLACED IT IN YOUR HANDS!

HE TEACHES YOU HIS WAY ON HOW TO VISIT HEAVEN WHENEVER YOU WANT… NOW!

Visit Heaven Whenever You Want Interview in Philadelphia Pennsylvania USA

Experiences in Heaven Interview with WebTalkRadio.net 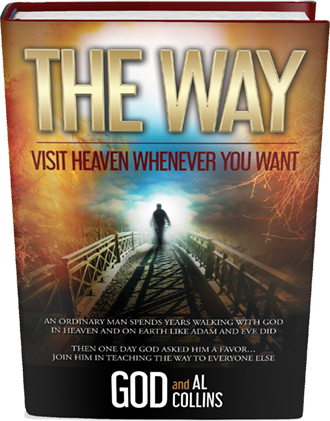 “I have many wonders in store for you. You will see when you come to Me. I do not withhold. I am here. I will not abandon you. I long to be with you. Come, and I will show you your path; your destiny. You will know why you are here. I will tell you. Come expecting gifts. I have so many things to tell you; to reveal to you; to give you. Come.”
… GOD – from Chapter 7

“My rare ones, do not think that you are not of much importance. I call out to the hearts of every person to come to Me. Rest with Me. Allow Me to calm the storms that come against you. Allow Me to clear the paths and quench your thirst. What you search for is here. It rests with Me and in this Kingdom. The world cannot touch your heart but with a dead finger. My hand contains life everlasting. Reach out for it, and it is there. I will not refuse you nor reject you. I will soothe your wounds. Come into Heaven and accept your inheritance. It waits for you. Your crowns are here. Your treasures are here. Do not abandon them, as your portion is set before you for a reason. Your inheritance is offered to you now, to partake of as you walk in the world.

“If you will come to Me, the treasures of Heaven belong to you. Walk in your gardens and mountains. Eat of the fruits that are ripe. So much waits for you. Come.”
… GOD – from Chapter 10

“The Way was virtually lost into history, saved for a few who learned how to walk with God, in His image.

God will speak to you directly on how you can find this lost ancient Way!

He’ll show you The Way to come and visit with Him face-to-face in His throne room!

He’ll teach you how to walk into Heaven whenever you like, to partake of all of its treasures!

He’ll talk directly to you about your life, to comfort you and love you!

You’ll learn how to see and have angels protect you and work with you!

God will teach you how to tap into unlimited wealth that He’s had waiting for you before you were born!

God will show you how only He can provide you with the secrets to life and success, as He says that the ways and secrets that man provides are a fool’s errand and have become their powerless gods.

Follow The Way now and step into immortality!” from the Introduction

This book provides keys and messages from God on how anyone can develop their spiritual senses and capabilities, with a final goal to walk with Him face-to-face. Which is His desire for everyone.

Included in the book are Al’s many experiences over the years on Earth and in Heaven of meeting, talking and walking with Father, Jesus, the Holy Spirit and angels, and how he got there, to assist others.

BOOK IN CHRISTIAN UNIVERSITIES, COLLEGES AND CHURCH GROUPS AROUND THE WORLD 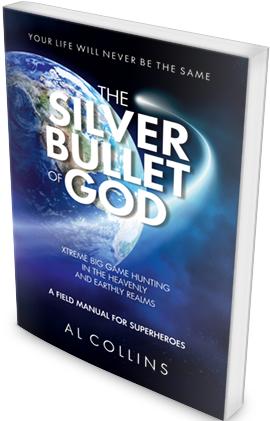 I visit heaven every day,

a thankful person for training said, who applied this teaching in their life!

Many others around the world have said things like,

“in mighty signs and wonders, by the power of the Spirit of God, so that from Jerusalem and round about to Illyricum I have fully preached the gospel of Christ.” Romans 15:19

Paul ran into people who were poisoning minds in Iconium. What did he do? They decided to stay a long time to fix the problem. How was the problem fixed? Speaking boldly in the Lord, Who bared witness to what they were saying with signs and wonders.

“Now it happened in Iconium that they went together to the synagogue of the Jews, and so spoke that a great multitude both of the Jews and of the Greeks believed. But the unbelieving Jews stirred up the Gentiles and poisoned their minds against the brethren. Therefore, they stayed there a long time, speaking boldly in the Lord, who was bearing witness to the word of His grace, granting signs and wonders to be done by their hands.” Acts 14:1-3

Leaders need to fully preach the Gospel accompanied with signs and wonders. It’s a requirement, not a request or a suggestion.

Christians are leaving the church,

because these results aren’t happening where they attend. The early church that had Christians full of Holy Spirit power and gifts, who worshiped in the spirit, has been reduced in many locations to social clubs with no spiritual worship or demonstration of the power of God, as God commands:

“And my speech and my preaching were not with persuasive words of human wisdom, but in demonstration of the Spirit and of power, that your faith should not be in the wisdom of men but in the power of God.” – 1 Corinthians 2:4-5

We must also demonstrate God’s power and do Xtreme Spiritual Warfare in the spirit, in the heavenlies as Paul said, “For we do not wrestle (war) against flesh and blood, but against principalities, against powers, against the rulers of the darkness of this age, against spiritual hosts of wickedness in the heavenly places”.
–Ephesians 6:12 NKJV

Sadly, most Christians are not doing anything in the spirit as the Bible teaches and as God requires!

Almost everything in life requires a spiritual warfare solution…

The list of benefits of spiritual warfare goes on and on to include benefiting neighborhoods, cities, regions and even entire nations!

Some people say, “Spiritual warfare is silly as satan doesn’t exist and there aren’t any evil spirits!” or “Our church says God takes care of Christians so we don’t need to do spiritual warfare or operate in spiritual gifts”! or “My life is what I make of it, mixed with good luck and bad luck, not because of my disobedience to God’s will!” or “My pastor says miracles, signs and wonders stopped with the last disciple in the Bible!” or “I don’t know how to do acts like Jesus and the disciples did or hear from God to do His will for my destiny, because our church never talks about or teaches these things!”

These kind of statements indicate a poor understanding of the power and authority available to all Christians in the spiritual realm! Regularly we hear from Christians that say spiritual training in churches and for Christians is virtually non-existent.

Our goal is God’s goal for your life… training you how to use your spiritual senses and gifts, worship in spirit and truth, demonstrate God’s power, go in the spirit, conduct spiritual warfare and healing, change the lives of people in your family, your church, your community, your city and your nation!

Fulfill your purpose in life!

Fulfill your destiny with God! 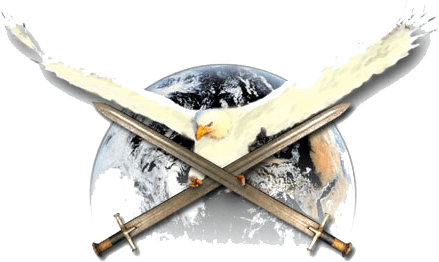