Over the years I occasionally hear from leaders complaining that the teaching provided by this ministry needs “more grace”.

We don’t push a false grace doctrine that’s accepted by the masses.

Sadly, most people and denominations that call themselves Christian, are actually heretics spouting out their personal versions of God’s grace. Heretics, according to God, not religion’s definition.

God discusses heretical religion in our book, The Way. Here it is in a nutshell…

6 I am surprised and astonished that you are so quickly turning renegade and deserting Him Who invited and called you by the grace (unmerited favor) of Christ (the Messiah) [and that you are transferring your allegiance] to a different [even an opposition] gospel.

7 Not that there is [or could be] any other [genuine Gospel], but there are [obviously] some who are troubling and disturbing and bewildering you [with a different kind of teaching which they offer as a gospel] and want to pervert and distort the Gospel of Christ (the Messiah) [into something which it absolutely is not]. 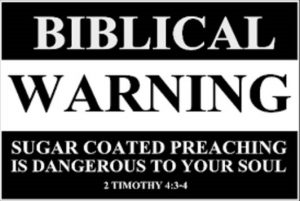 8 But even if we or an angel from heaven should preach to you a gospel contrary to and different from that which we preached to you, let him be accursed (anathema, devoted to destruction, doomed to eternal punishment)!

9 As we said before, so I now say again: If anyone is preaching to you a gospel different from or contrary to that which you received [from us], let him be accursed (anathema, devoted to destruction, doomed to eternal punishment)!” Galatians 1:6-9 AMPC

The false grace doctrine has cursed and sent billions to the lake of fire and is sending more on their way there, unless leaders wake up and start teaching the truth about God’s grace!

The false grace doctrine also teaches that we don’t have to do anything, and frankly they say, we shouldn’t do anything, as Jesus’ work on the Cross covers us in salvation and grace. Just sit in a pew once and awhile and wait. They will quote this scripture…

“For by grace you have been saved through faith, and that not of yourselves; it is the gift of God, 9 not of works, lest anyone should boast.” Ephesians 2:8-9 NKJV

They believe that scripture gives them license to do nothing. They choose to ignore all the hundreds of scriptures with God’s commands for us, as they don’t fit their mongrel religion.

The above scripture is misinterpreted by leaders and people. It isn’t saying we don’t work, it’s saying that works by themselves can’t save you. Works don’t replace salvation through Jesus. But we work as God has created us to be workers in the Kingdom… now.

“For we are His workmanship, created in Christ Jesus for good works, which God prepared beforehand that we should walk in them.” Ephesians 2:10 NKJV

“What does it profit, my brethren, if someone says he has faith but does not have works? Can faith save him?” James 2:14 NKJV

“But someone will say, “You have faith, and I have works.” Show me your faith without your works, and I will show you my faith by my works. 19 You believe that there is one God. You do well. Even the demons believe—and tremble! 20 But do you want to know, O foolish man, that faith without works is dead?” James 2:18-20 NKJV

People falsely believe that by accepting Jesus or “being Christian” or “attending church”, covers them from all past, present and future sin. People who don’t repent are lost in their sin.

“If we say that we have fellowship with Him, and walk in darkness, we lie and do not practice the truth.” 1 John 1:6 NKJV

Jesus said that we must ask Father God for forgiveness and forgive others.

“And forgive us our sins, for we ourselves also forgive everyone who is indebted to us [who has offended us or done us wrong]. And bring us not into temptation but rescue us from evil.” Luke 11:4; Matthew 6:12 AMPC

Most people who consider themselves to be Christian, adhere to the “exemption doctrine”. They believe they are exempt from certain parts of God’s Word. They cherry-pick from God’s Word, blend in some religion and personal desires, ending up as some strange mongrel being, living life operating in the flesh. They live in a false reality. A false grace.

9 Do you not know that the unrighteous and the wrongdoers will not inherit or have any share in the kingdom of God? Do not be deceived (misled): neither the impure and immoral, nor idolaters, nor adulterers, nor those who participate in homosexuality,

10 Nor cheats (swindlers and thieves), nor greedy graspers, nor drunkards, nor foulmouthed revilers and slanderers, nor extortioners and robbers will inherit or have any share in the kingdom of God.” 1 Corinthians 6:9-10 AMPC

19 Now the doings (practices) of the flesh are clear (obvious): they are immorality, impurity, indecency,

21 Envy, drunkenness, carousing, and the like. I warn you beforehand, just as I did previously, that those who do such things shall not inherit the kingdom of God.” Galatians 5:19-21 AMPC

“But as for the cowards and the ignoble and the contemptible and the cravenly lacking in courage and the cowardly submissive, and as for the unbelieving and faithless, and as for the depraved and defiled with abominations, and as for murderers and the lewd and adulterous and the practicers of magic arts and the idolaters (those who give supreme devotion to anyone or anything other than God) and all liars (those who knowingly convey untruth by word or deed)—[all of these shall have] their part in the lake that blazes with fire and brimstone. This is the second death.” Revelation 21:8 AMPC

18 For when they speak great swelling words of emptiness, they allure through the lusts of the flesh, through lewdness, the ones who have actually escaped from those who live in error. 19 While they promise them liberty, they 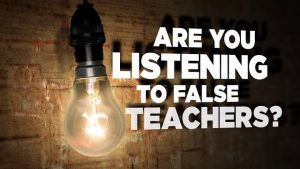 themselves are slaves of corruption; for by whom a person is overcome, by him also he is brought into bondage. 20 For if, after they have escaped the pollutions of the world through the knowledge of the Lord and Savior Jesus Christ, they are again entangled in them and overcome, the latter end is worse for them than the beginning. 21 For it would have been better for them not to have known the way of righteousness, than having known it, to turn from the holy commandment delivered to them. 22 But it has happened to them according to the true proverb: “A dog returns to his own vomit,” and, “a sow, having washed, to her wallowing in the mire.” 2 Peter 2:18-22 NKJV

Many that follow a false grace gospel will say that their sins are covered by grace. Foolish thinking indeed! We’ve just read a few scriptures that says certain sinful life choices lead to eternal death.

God’s grace enables us to resist sinful temptations. If we are truly Christian, we walk in obedience to God and repent when we sin to receive His unmerited mercy, grace and forgiveness.

35 The Father loves the Son and has given (entrusted, committed) everything into His hand. 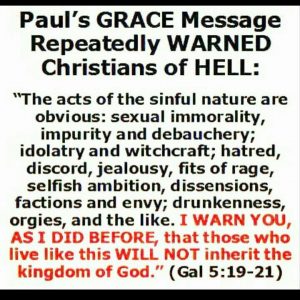 36 And he who believes in (has faith in, clings to, relies on) the Son has (now possesses) eternal life. But whoever disobeys (is unbelieving toward, refuses to trust in, disregards, is not subject to) the Son will never see (experience) life, but [instead] the wrath of God abides on him. [God’s displeasure remains on him; His indignation hangs over him continually.]” John3:35-36 AMPC

There are two parts to religious legalism. One says that “being good” or good works will get you into heaven. The other is, thinking that those who work for God or work at being holy are trying to “work” their way into heaven.

Those who follow God’s commands and standards are obedient. This does require work. Work at following God’s Word, not working to get into heaven. We’re not legalistic, we’re obedient.

“You are My friends if you keep on doing the things which I command you to do.” John 15:14 AMPC

“Therefore, my beloved, as you have always obeyed, not as in my presence only, but now much more in my absence, work out your own salvation with fear and trembling; for it is God who works in you both to will and to do for His good pleasure.” Philippians 2:12-13 NKJV

I’m amazed that leaders actually adhere to and preach this false doctrine from satan, as there are so many scriptures disputing this false doctrine. Again, another religious, heretical concept that curses people, discussed in The Way book. People believe that once they accept Jesus, they have a magical ticket to heaven sitting in their pocket that sanctions every sinful thought, word and deed in life.

26 For if we go on deliberately and willingly sinning after once acquiring the knowledge of the Truth, there is no longer any sacrifice left to atone for [our] sins [no further offering to which to look forward].

27 [There is nothing left for us then] but a kind of awful and fearful prospect and expectation of divine judgment and the fury of burning wrath and indignation which will consume those who put themselves in opposition [to God].” Hebrews 10:26-27 AMPC

The false grace doctrine, with its many tentacles of death, leads to eternal destruction, as God clearly states. His definition of grace is not up for compromise, manipulation or discussion to fit some religious doctrine or political or social correctness.

This ministry reveals God’s truth to those who have been deceived by false denominations and their false leaders for centuries. Revelation of God’s truth is not always pleasant, but we’d rather that, than the lake of fire alternative for people.

A final warning from God to false leaders…

“If I say to the wicked, you shall surely die, and you do not give him warning or speak to warn the wicked to turn from his wicked way, to save his life, the same wicked man shall die in his iniquity, but his blood will I require at your hand.” Ezekiel 3:18 NKJV

We don’t need “more grace”, we need people to be saved from false grace doctrines!

Let’s teach it right leaders, as one day we all face judgment…

“Not many [of you] should become teachers (self-constituted censors and reprovers of others), my brethren, for you know that we [teachers] will be judged by a higher standard and with greater severity [than other people; thus we assume the greater accountability and the more condemnation].” James 3:1 AMPC