Many people in North America are oblivious to the persecution of Christians going on in the world. The liberal and even the conservative main stream media doesn’t report about it, which is a hidden form of persecution against Christians of itself. They’ll immediately report about some verbal slight against a muslim, but nothing is heard about the rising global attacks on Christians. Global attacks considered ‘genocide’ in many circles.

“4,136 Christians were killed for faith-related reasons,” noted Open Doors in its World Watch List 2019. “On average, that’s 11 Christians killed every day for their faith.” Additionally, “2,625 Christians were detained without trial, arrested, sentenced and imprisoned” and “1,266 churches or Christian buildings were attacked.”

The report further states that more than 245 million Christians around the world are currently suffering from persecution. In other words, “1 in 9 Christians experience high levels of persecution worldwide.”

Typically, women fare worse: “In many places, they experience a ‘double persecution’– one for being a Christian and one for being a woman.” As for specific numbers: “At least six women every day are raped, sexually harassed or forced into marriage to a Muslim man under the threat of death for their Christian faith…”

The “Independent Review into the global persecution of Christians,” led by Rev. Philip Mounstephen, the Bishop of Truro, and published in early 2019, states:

“Evidence shows not only the geographic spread of anti-Christian persecution, but also its increasing severity. In some regions, the level and nature of persecution is arguably coming close to meeting the international definition of genocide, according to that adopted by the UN.”

The bishop’s detailed report, which was commissioned by then British Foreign Secretary Jeremy Hunt, concluded that the persecution of Christians is near “genocide” levels.

Both studies make clear that most of the persecution occurs in the Muslim world. In seven of the top ten worst nations, “the primary cause of persecution is Islamic oppression,” notes Open Doors. Additionally, 38 of the 50 nations that persecute Christians the most are Muslim-majority.

“The persecution of Christians is perhaps at its most virulent in the region of the birthplace of Christianity — the Middle East & North Africa.”

“Christianity now faces the possibility of being wiped-out in parts of the Middle East where its roots go back furthest. In Palestine, Christian numbers are below 1.5 percent; in Syria the Christian population has declined from 1.7 million in 2011 to below 450,000 and in Iraq, Christian numbers have slumped from 1.5 million before 2003 to below 120,000 today.”

“In countries such as Algeria, Egypt, Iran, Iraq, Syria and Saudi Arabia the situation of Christians and other minorities has reached an alarming stage.”

“There is mass violence which regularly expresses itself through the bombing of churches, as has been the case in countries such as Egypt, Pakistan, and Indonesia.”

“The single-greatest threat to Christians in Nigeria … came from Islamist militant group Boko Haram, with US intelligence reports in 2015 suggesting that 200,000 Christians were at risk of being killed… Those worst affected included Christian women and girls ‘abducted, and forced to convert, enter forced marriages, sexual abuse and torture.'”

“An intent to erase all evidence of the Christian presence [in Syria, Iraq, Egypt, north-east Nigeria and the Philippines] was made plain by the removal of crosses, the destruction of Church buildings and other Church symbols. The killing and abduction of clergy represented a direct attack on the Church’s structure and leadership.”

Outside the Muslim world, the persecution of Christians is also getting significantly worse, particularly North Korea, where “never-ending pressure and violence” is directed against Christians. In India, for the first time in modern history, Christians are experiencing “extreme persecution.”

In the end, numbers and statistics will never adequately capture the magnitude of the problem. “Too many to count, too many unknown,” states the video by International Day of Prayer for the Persecuted Church, “All because they bear the name of Jesus.”

This article is just the tip of it all. The scope of Christian genocide is massive.

Christianity has been experiencing a holocaust for 2000 years!

Here’s a quote from my book, “The Silver Bullet of God”…

“What is the Christian Holocaust?

In 2002, a study called “The New Persecuted” was presented at a conference in Italy by Antonio Socci. His study concluded that approximately 70 MILLION Christians have been martyred since Christ!

The most shocking finding was that 45.5 MILLION were martyred just in the 20th Century!

The 20th Century saw 65% of all Christian martyrs!

That’s roughly 52 Christians were being murdered every hour of every day somewhere in the world because of their faith!

Christian martyrdom is growing at a rapid pace!

This doesn’t include the countless millions imprisoned, tortured, attacked, maimed, sold into slavery and victimized… just because they are Christian!

Where’s the Fox News and CNN exposé for these atrocities?

Where’s the UN sanctions or destruction of regimes that allow and perpetuate these crimes?

Where’s the hunting down everywhere and anywhere in the world of these criminals to bring them to justice, like the Israelis did of the Nazis?

A corrupt, New Age world manipulated by evil spiritual principalities and powers, is in the business of Christian genocide!

End of “The Silver Bullet of God” quote.

Now, I know some little old ladies Wednesday afternoon church tea group in middle America or the “Bible belt” isn’t seeing any of this, but here’s the reality…

If these pictures offend you, good!

This is reality, not political correctness. Not a media whitewash.

But these aren’t the worst.

There are pictures of Turkey crucifying naked Christian Armenian woman that the world still refuses to call genocide of Christians.

There’s mass graves of Christian men, women and children strewn across Africa and the Middle East that cry out for justice.

Atrocities against Christians in China that are known about, but aren’t mentioned, as it might affect international relations (aka money) with them.

Persecution is going on in Western countries too. It may not be as brutal as it is in some countries… yet… attacks from muslim, lgbt, antifa, Hollywood, atheist and liberal activists are stomping down on Christianity, with the ‘hate speech’ argument. Chic-fil-A is just a recent example of another major Christian corporation that just this week folded to persecution. There are also prayer groups in private residencies shutting down because it offends someone and many cities have had to tear down anything Christian inside or outside any public buildings or be sued. 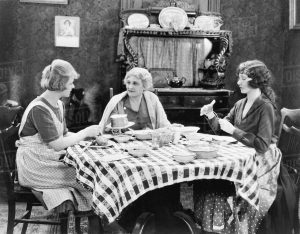 What’s a little old ladies Wednesday afternoon church tea group in Middle America or the Bible belt to do about all of this?

Ask the Holy Spirit what His plan for you is.

There’s an evil spiritual realm behind all of this.

As a group, you can accomplish a lot!

It’s OK, you can still drink tea and do spiritual warfare at the same time!

Individual ladies… you can do a lot too! Just study about Esther or Ruth or Phoebe or Junia or Maria Woodworth-Etter or any number of the “lone rangers” that the “modern church” like to call them.

Guys. I’m not forgetting you. See what the Holy Spirit has in mind for you. Ask. Listen. Do. Next.

Ask God what His will for you is.