The Holy Spirit has been pressing me this week to write about lying.

Who knew that God hates lying?

Who knew that lying is a sin?

Who knew that lying removes salvation?

The Bible tells us so.

“He who works deceit shall not dwell within my house;
He who tells lies shall not continue in my presence.” Psalm 101:7

“These six things the Lord hates,
Yes, seven are an abomination to Him:
A proud look,
A lying tongue,
Hands that shed innocent blood,
A heart that devises wicked plans,
Feet that are swift in running to evil,
A false witness who speaks lies,
And one who sows discord among brethren.” Proverbs 6:16-19

“Lying lips are an abomination to the Lord,
But those who deal truthfully are His delight.” Proverbs 12:22

“Blessed are those who do His commandments, that they may have the right to the tree of life, and may enter through the gates into the city. But outside are dogs and sorcerers and sexually immoral and murderers and idolaters, and whoever loves and practices a lie.” Revelation 22:14-15

There are so many more scriptures on lying, so no Christian can claim that they don’t know that lying is a sin. Meaning, God says He hates lying and that lying keeps people from Him in this life and the next.

Let’s look at some statistics on lying:

By the age of four, 90% of children have learned the concept of lying. Based on studies performed in the past, it is estimated that 60% of adults can not have a ten-minute conversation without lying at least once. Within those ten minutes, an average of three lies were told. When meeting someone new, the average person will lie 2 to 3 times in 10 minutes. (survey by BrandonGaille)

– 12% of adults admit to telling a lie often or sometimes.
– 80% of women admit to telling harmless half-truths occasionally.
– 31% of people admit to lying on their resumes.
– 13% of patients lie to their doctor.
– 32% of patients stretched the truth to their doctor.
– 30% lie about their diet and exercise regiments.
– 6 lies are told daily by men to their partner, boss, or colleagues.
– 3 lies are told daily by women to their partner, boss, or colleagues.
– Lying is considered more common among phone calls than face to face chats.
– 1 lie in every 7 is discovered as far as liars can tell.
– A 10th of lies are just exaggerations and 60% were outright deceptions.
– 70% of liars claim they would tell their lies again.
– Americans tell an average of 11 lies a week.

That’s a lot of lying.

Most people think lying is OK, especially if they’re “little white lies” (small ones) or lying to “stretch the truth” or lying so as not to offend someone.

Looking through God’s Word, there’s no mention of different categories of acceptable or unacceptable lies. Not even a mention of lying being different than murder, according to God.

We saw all those everyday life statistics, but what would we call doctrines/denominations/leaders/people that attack God’s truth, or contradict, compromise with or deliberately ignore (deceit) parts of God’s Word?

“I marvel that you are turning away so soon from Him who called you in the grace of Christ, to a different gospel, which is not another; but there are some who trouble you and want to pervert the gospel of Christ. But even if we, or an angel from heaven, preach any other gospel to you than what we have preached to you, let him be accursed. As we have said before, so now I say again, if anyone preaches any other gospel to you than what you have received, let him be accursed.” Galatians 1:6-9

God says that any different gospel than His is perverted. A lie. Those who preach it are cursed. That’s pretty plain.

So, people who follow a perverted (lying/false/distorted/rebellious) gospel are really saying they prefer to believe their version of the truth. Which would make them unbelievers of God’s Word.

What does God say we should do about that?

“Do not be unequally yoked together with unbelievers. For what fellowship has righteousness with lawlessness? And what communion has light with darkness? And what accord has Christ with Belial? Or what part has a believer with an unbeliever? And what agreement has the temple of God with idols? For you are the temple of the living God. As God has said:

“I will dwell in them
And walk among them.
I will be their God,
And they shall be My people.”

“Come out from among them
And be separate, says the Lord.
Do not touch what is unclean,
And I will receive you.”
“I will be a Father to you,
And you shall be My sons and daughters,
Says the Lord Almighty.” 2 Corinthians 6:14-18

God’s very clear of what He says about lying and on how we should conduct ourselves with lying and with liars.

I officially walked away from organized religion when I was 16. Mentally walked away when I was 12, when the Holy Spirit zapped me. Dismissing all the mainstream religions as liars is simplistic, for those who have eyes to see and ears to see (Matthew 13:9-16). Some have to be explored. I poked my head in here and there over the years in various places that said they were operating in the supernatural and under God’s Word. The lies quickly come to light. Beyond the false doctrines, other issues come into play such as greed, glory, power, back-stabbing and pride.

When I point such facts out, people say, “Well, just eat the meat and throw away the bones”. That’s not biblical either. God says…

“Your glorying is not good. Do you not know that a little leaven leavens the whole lump? Therefore, purge out the old leaven, that you may be a new lump, since you truly are unleavened. For indeed Christ, our Passover, was sacrificed for us. Therefore, let us keep the feast, not with old leaven, nor with the leaven of malice and wickedness, but with the unleavened bread of sincerity and truth.” 1 Corinthians 5:6-8

A little bit of false gospel are lies that wrecks the rest. God’s says it plain.

The Holy Spirit just showed me a picture so I’ll share it. 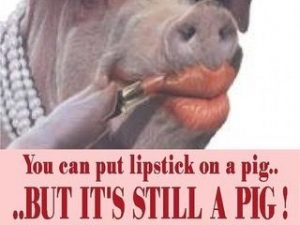 When people try to justify their lying position, it’s still a lie, no matter how well-meaning it may look and sound or how much lipstick you put on it.

And, when a person associates with lying people and lying religions, whether they accept their lies or not, they’re telling everyone that sees them, that they’re a hypocrite.

We hear from people that say they can’t hear, see, travel or do anything in the spirit no matter how hard they try. There’s a block they say. Perhaps their lies are handicapping their abilities to visit God, as we read at the start of this teaching in Psalm 101:7.

People might fool everyone with their lying ways, but lies never get past God’s lie detector! Can’t dodge Him!

To all the liars and those following lying doctrines and lying leaders, I realize that this teaching will fall on dull ears. And, even hostile ears. That’s not my problem. I follow the Holy Spirit’s direction on writing this piece. Whether or not people listen is beyond my pay-grade.

For those who prefer not to heed God’s warnings, the lake of fire has plenty of room.

“Now I urge you, brethren, note those who cause divisions and offenses, contrary to the doctrine which you learned, and avoid them. For those who are such do not serve our Lord Jesus Christ, but their own belly, and by smooth words and flattering speech deceive the hearts of the simple. For your obedience has become known to all. Therefore, I am glad on your behalf; but I want you to be wise in what is good, and simple concerning evil.” Romans 16:17-19

God’s Word determines what is good and what is evil, not man, not an organization, not an ideology.

Let’s highlight again what God says… “I want you to be wise in what is good, and simple concerning evil.”

That’s it in a nutshell!

All scripture quotes in NKJV.